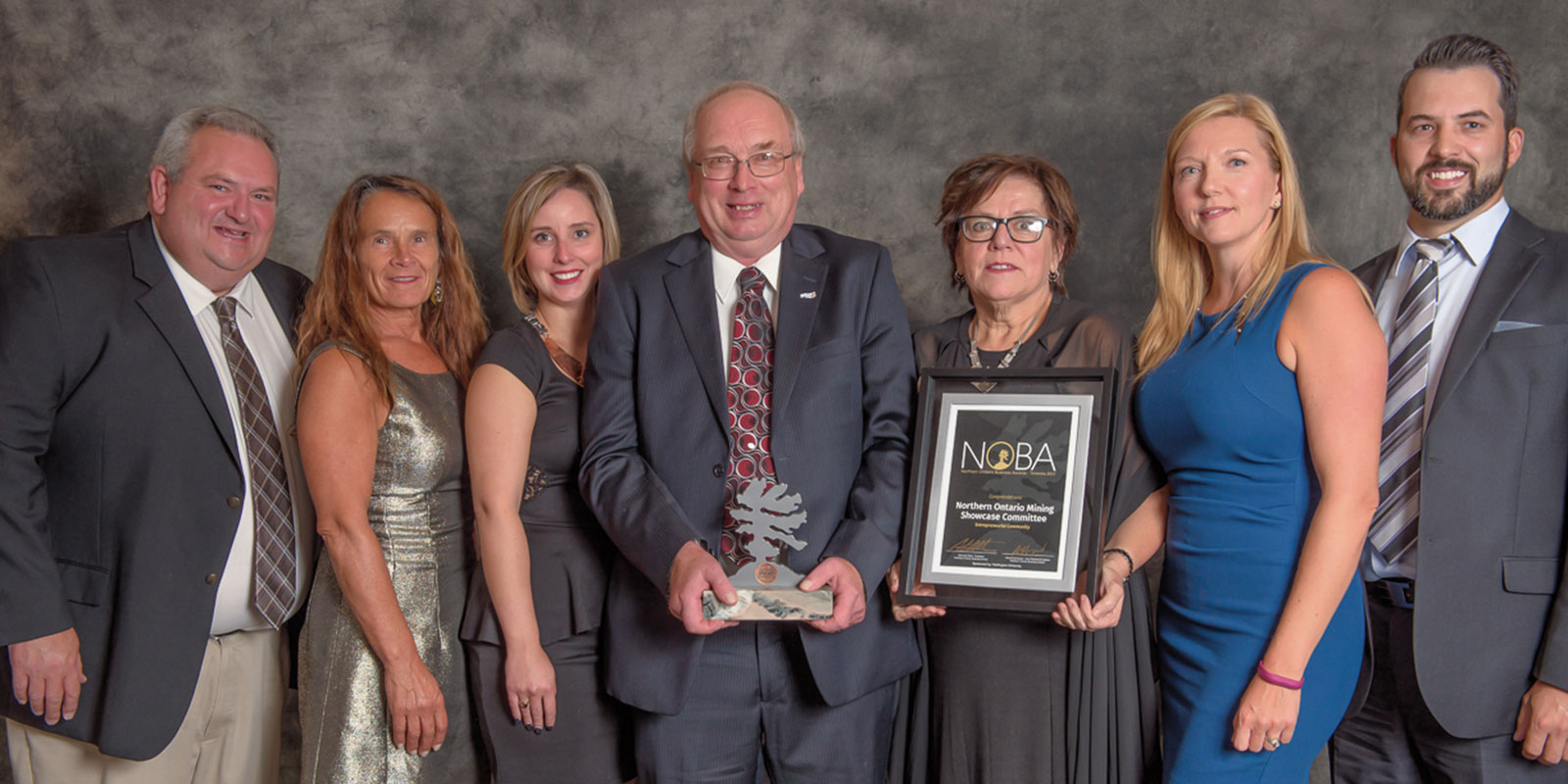 Entrepreneurial Community of the Year Award

Winners of the Entrepreneurial Community of the Year Award.

James Franks calls the Northern Ontario Mining Showcase the “most valuable development project” he’s ever been associated with.

Even though the annual event is staged in downtown Toronto, more than 500 kilometres down Highway 11 from Temiskaming Shores where Franks is the economic development officer, he can’t think of an activity that’s had a greater impact on local business.

Spearheaded by the City of Temiskaming Shores and subsidized by FedNor, the Northern Ontario Mining Showcase has blossomed since its inaugural event in 2014 to be the largest exhibitor at the annual Prospectors and Developers Association of Canada (PDAC) annual mining show.

Occupying 9,600 square feet of show space, this regional pavilion competes for attention and investment on a level footing with international mining jurisdictions like Mexico, Peru and Australia. At last spring’s convention, approximately 12,000 people visited the 90 exhibitors in the Northern Ontario pavilion among the 25,000 PDAC delegates from 125 countries.

The showcase provides an incredible exposure for small to medium-sized companies and organizations to promote their products, services and expertise to a global audience.

“We’ve got all these countries in one place for five days.” – James Franks

The showcase project is supported by partner communities across the North with an organizing committee of representatives from northeastern and northwestern Ontario.

The showcase project is supported by partner communities across the North with an organizing committee of representatives from northeastern and northwestern Ontario.

A company’s investment of a few hundred dollars for a fully wired kiosk in the pavilion is usually money well spent for the networking opportunities created.

Of the exhibitors surveyed and interviewed following the 2016 Showcase, the spinoffs for those companies amounted to $7 million in total sales, 66 jobs created, and 380 jobs retained.

The showcase has been an evolutionary process since 2010 when representatives of the Township of James and the Elk Lake Community Forest first appeared at PDAC to promote the history of Jack Monroe, a well-known prospector who promoted Elk Lake to the mining world in the early 1900s.

Their presence occupied a small booth on the corner of the Ontario Pavilion. Franks remembers getting asked technical questions from PDAC delegates that he couldn’t quite answer.

The next year, organizers brought along a handful of local companies for a meetand- greet in a small hotel boardroom near the Metro Toronto Convention Centre.

The event went so well, they upscaled it to a one-day fling at Steamwhistle Brewery in 2014 – the first official Northern showcase – which enticed more than 1,000 convention delegates to circulate among 35 mining supply exhibitors.

The next year, they were successful in migrating over to the convention hall floor where they recruited 55 companies from across Northern Ontario.

In March 2018, organizers expect to shoehorn in 10 more companies to reach an even 100.

Franks said there was no way they would be able to stage the event without FedNor’s help.

“There’s no question, without their support it just wouldn’t happen.”

He also pays credit to organizer Marla Tremblay, a former City of North Bay economic development officer, for her tireless efforts in steering the event.

“Marla is one of the keys. We were working with her since day one. With her mining industry connections, she works to make the event come together.”